Mirror Memoirs is proud to present “Transmutation: A Ceremony,” a theater performance featuring our sacred storytellers Samantha Jo Dato, Ebony Ava Harper, Alexandra Magallon and Sydney Rogers. This production, supporting these four Black and Afro-Latinx transgender, non-binary and intersex survivors of child sexual abuse to share their true stories of survival, and their visions of healing and the world we need and deserve, was written and directed by Luna Merbruja and Amita Swadhin, with additional writing by Jaden Fields.

This performance is supported in part by an arts grant from the City of West Hollywood, additional grants from the California LGBT Arts Alliance, Asian Women Giving Circle, Jenny Phillips Future Freedoms Fund, and Tory Burch Foundation, and donations from numerous individuals.

Tickets are free, but we are still raising donations to cover the production costs. 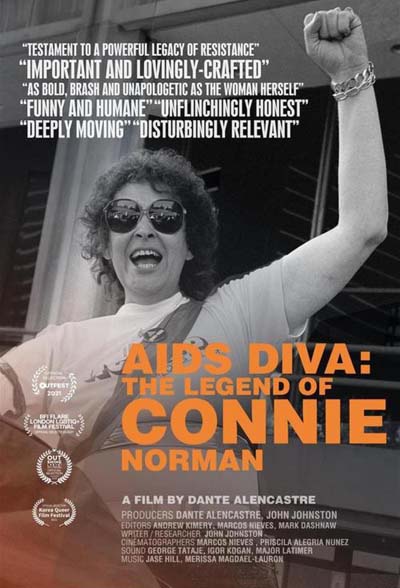 The number and range of people involved in the struggle against AIDS is larger and wider than we can possibly know. It’s proven once again by this intriguing portrait of Connie Norman, a local LA activist who worked tirelessly to make a difference. Director Dante Alencastre deftly handles this portrait of a political figure whose HIV diagnosis spurred her eloquent rage against complacency, hatred and denial as the AIDS virus ravaged the queer community. Yet Norman is also shown as a nuanced early spokesperson for trans rights, raising her head high above the parapet and creating an unbreakable bridge between sexuality and gender that we are still crossing today. 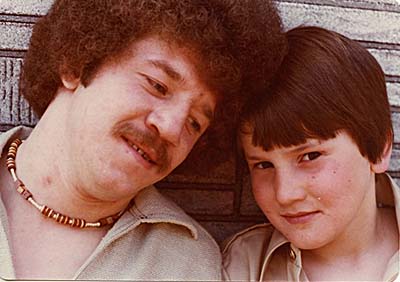 The Papi Project is an interdisciplinary project including public collaborative performances, videos, photography, archival images, 3D photographs and writing. This project investigates a simultaneous absence of my Papi (dad) and an examination of the AIDS pandemic in 1980/90s with working poor men of color and queer family.

This program is supported by a grant from the City of West Hollywood’s Arts Division.
@wehoarts 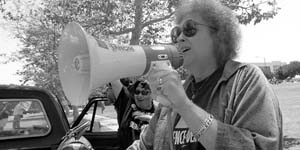 As the self-appointed “AIDS DIVA” and ACT UP/LA spokesperson in early 90’s Los Angeles, Connie Norman stood proudly in her multiple, fluid and evolving LGBTQ identities. Both beloved and confrontational, Connie’s soulful and salty rantings and intersectional politics were heard widely through her newspaper column, and pioneering radio and cable TV talk shows. Serving as a bridge in both gender and politics, and modeling “wokeness” in an early era of crisis, Connie’s piercing and compassionate voice urges us again into action, to fully engage with our lives and our world.

Honoree
The Alliance is also pleased to be honoring filmmaker ARTHUR DONG this evening with its inaugural Trail Blazer Award.
Arthur Dong is an Oscar®-nominated and triple Sundance award-winning filmmaker, author and curator whose work centers on Asian American and LGBTQ stories. His films that investigate anti-gay prejudice include Family Fundamentals, Licensed to Kill, and Coming Out Under Fire. His films about Asian Americans include Sewing Woman, Forbidden City, USA, Hollywood Chinese, and The Killing Fields of Dr. Haing S. Ngor. 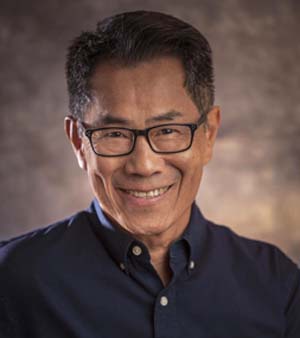 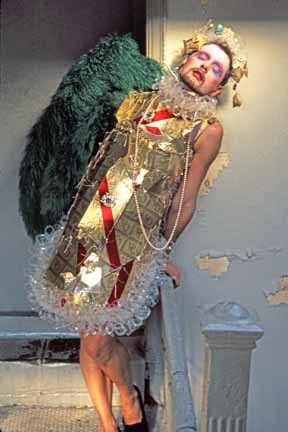 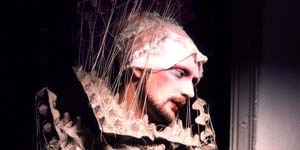 Lecture sponsored by the California LGBT Arts Alliance in conjunction with the Varble Exhibit at the ONE Gallery,
The Gutter Art of Stephen Varble: Genderqueer Performance in the 1970s, Photographs by Greg Day.

Q & A with David Getsy after lecture. Reception to follow.
Parking free at the library structure with validation.

Read More and Get Tickets to Rubbish and Dreams 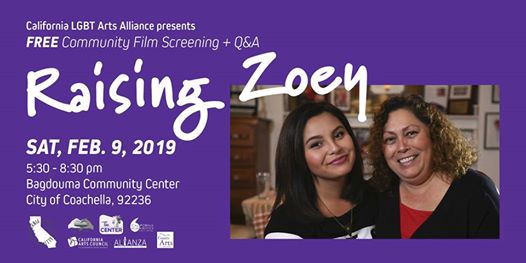 13 year-old trans activist Zoey Luna wants nothing more than to simply go to school, learn, have fun with her friends in Downey, CA. Unfortunately, ignorance and intolerance have not always made this easy. With the help of her mother Ofelia, her older sister Leticia and the ACLU, Zoey fought school officials for her right to self-identify in school. Even in the face of bullying and endless teasing from both school officials and students, Zoey determinedly continues to live her life as she is and tells her story in the hopes of helping others persevere in living their authentic lives.

I met Stephen Varble at the Spike Bar in Chelsea in 1975. We became friends and I spent two years photographing his life, studio and public performances. I was captivated by Stephen’s visual and performance art and he greatly inspired my photography. At that time I was a graduate student in cultural anthropology at Rutgers. Following field research protocols, I collected everything about him including personal letters, fliers, newsletters and costumes.

I left New York in 1976. Stephen died of AIDS in 1984. There was no mention of him until 2015 when I received an email from historian David Getsy. David was researching Stephen’s life and had found very limited resources in public archives, a frequent problem in LGBT history. Fortunately, I had kept everything and was delighted to be included in his research process. I discovered that my personal collection was an essential resource for the project. I also learned that Stephen’s pioneer work as a Genderqueer artist, critic of America culture and of the arts establishment, remains very relevant today.

Historian and curator David Getsy has done an amazing job of researching and reconstructing Stephen’s life/art and his importance in the Avant Guard and Queer art scene of 70’s New York. Stephen Varble has returned to our lives and our history thanks to Dr. Getsy and the personal collections that have made his research possible. Every person who collects our community’s history creates a potential resource for research. Collect it, keep it and share it!

David J. Getsy’s talk explores performance artist, playwright, and fashion designer Stephen Varble (1946–1984), who was a fixture on the streets of SoHo in the 1970s, but whose ephemeral practice has largely gone unrecognized in histories of art. His guerrilla practice aimed at disruption — of commerce, of gender roles, and of the institutions of art and celebrity. In elaborate sculptural garments made of street trash, Varble held unauthorized gallery tours through SoHo and protest performances in banks, Fifth Avenue stores, and in the street.

‘Color Bonita’ began several years ago as an ethnographic art project in Los Angeles, California. Over 100 initial conversations occurred over a two year period in various locations throughout Los Angeles County with Latino men who identified as gay, homosexual, bisexual, men “on the down-low” (on the DL) and men who have with sex men (MSM). ‘Color Bonita’ is a collection of voices from 29 of these recorded interviews focusing on the Latino family, the Catholic Church, homophobia, machismo, and racism.

The Dancers We Lost opening lecture at Temple Isaiah Jewish Community Center in Palm Springs was well attended and included many retired dancers.

Presented by Impact Stories, California LGBT Arts Alliance and Temple Isaiah Jewish Community Center.
The Dancers We Lost Exhibit is made possible by funding from the California Arts Council 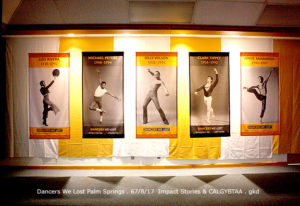 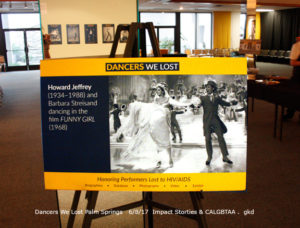 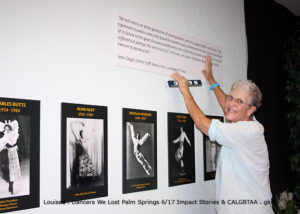 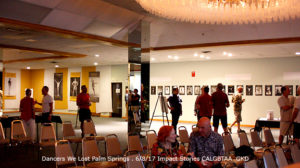 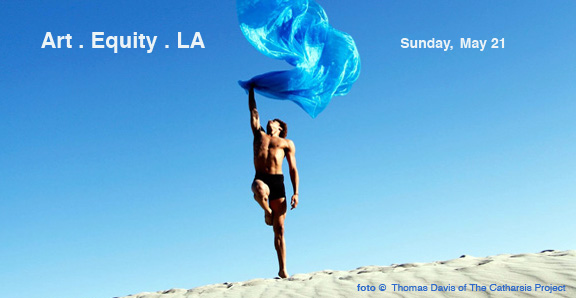 Art.Equity.LA, held May 21, 2017 was a well attended event of LGBT artists and art advocates of color.

Artists performed and panelists discussed the importance of the ats in under served communities and how public and private funders can better support them. 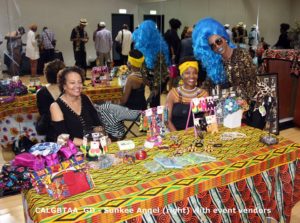 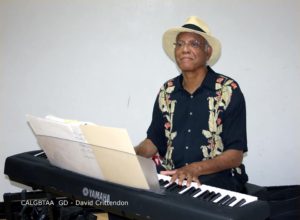 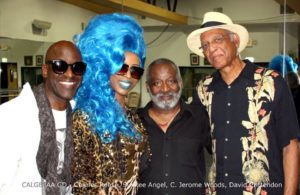 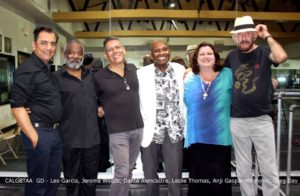 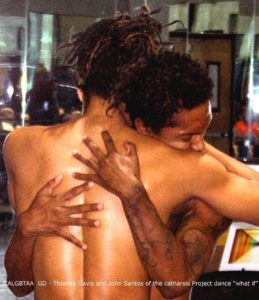 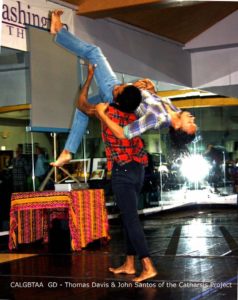 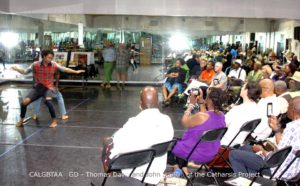 The CAC Local Impact Grant will support the Dancers We Lost exhibition and panel discussions at four LGBT Centers located in Riverside, Los Angeles and Orange Couties. The first exhibition will open at the LGBT Center Long Beach in late August 2016. It will continue through September and run concurrent with the annual Q Film Festival. Exhibition openings and panel dates will be presented shortly on our website and Facebook page.
Fore more information go to: dancerswelost.org

Presented by the California LGBT Arts Alliance and the City of west Hollywood One City One Pride Queer Arts Festival
Wednesday May 25, 2016: Queer California – On Music and Mapping

Join the Alliance at a reception and tour of the Robert Mapplethorpe Exhibition at the Getty Center, Saturday April 2nd, 2016.

A collaboration between the City of West Hollywood through WeHo Arts/One City One Pride, Los Angeles LGBT Center’s Advocate & Gochis Galleries and the Center for the Arts of Performance / UCLA with assistance from the ONE National Gay & Lesbian Archives and the California LGBT Arts Alliance.

All are welcome to this free event.
Validated parking will be available in the adjacent five-story parking structure.

Info/ updates/ to get on our email list: http://qcc2.org/summit

Presented by the California LGBT Arts Alliance, ONE National Gay & Lesbian Archives at the USC Libraries, and the City of West Hollywood through its Arts and Cultural Affairs Commission.

Funding provided by the California Arts Council, The National Endowment for the Arts, the AIDS Healthcare Foundation, the City of West Hollywood Arts and Cultural Affairs Commission and the Los Angeles Department of Cultural Affairs. 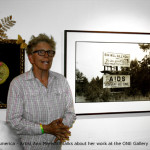 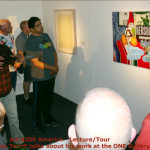 Funding provided by the California Arts Council, The National Endowment for the Arts, the AIDS Healthcare Foundation, the City of West Hollywood Arts and Cultural Affairs Commission and the Los Angeles Department of Cultural Affairs. 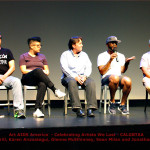 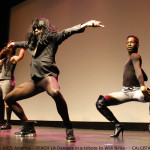 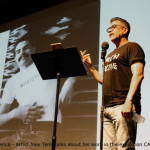 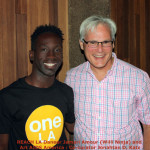 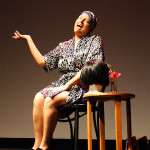 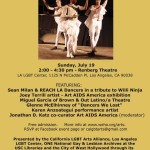 Directed By: Stephen Winter. In his newest experimental feature, Stephen Winter (CHOCOLATE BABIES) fictionalizes the infamous 12-hour film shoot that resulted in Shirley Clarke’s trailblazing work of cinéma vérité, PORTRAIT OF JASON (1967). Jason Holliday (Jack Waters), an outspoken and flamboyant African American hustler, recounts his trials and tribulations in NYC’s 1960s gay counterculture. As the shoot wears on, Shirley (Sarah Schulman) and her crew goad and provoke one of documentary cinema’s most remarkable subjects, and we are granted a glimpse at the intricacies of pride and survival in a far less permissive climate.
PRE-SCREENING RECEPTION: REDCAT Lounge
http://www.outfest.org/tixSYS/2015/xslguide/eventnote.php?EventNumber=0334&notepg= 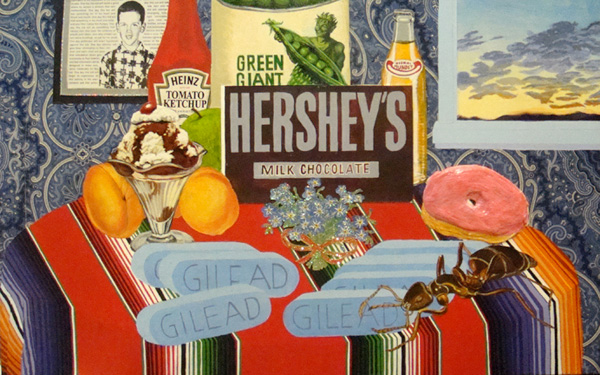 Curator and Artists Debate the Thesis of the Art, AIDS, WeHo Exhibition. With co-curator Dr. Jonathan D. Katz and artists Joey Terrill and Rudy Lemcke.Moderator: Tina Takemoto, artist and associate professor at the California College of the Arts.

This is a free event

Free validated parking will be provided for the 5-story Public/Park Parking Structure on El Tovar Pl.

A lecture by historian Glenne McElhinney, Director of Impact Stories and Dancers We Lost.

Presented by the California LGBT Arts Alliance, Impact Stories and the City of West Hollywood One City One Pride LGBTQ Arts Festival.

Dancers We Lost (DWL) is a comprehensive dance history project honoring professional performers who died due to HIV/AIDS complications.

The heart and soul of DWL is a searchable database and biography files of each of the dancers. The most visual part of the project is an arts and public history exhibit showing the performers in their prime “strutting their stuff”. The photography exhibit will highlight the dancers who performed in a myriad of performance disciplines including: Broadway and Las Vegas Shows, Dance Concerts, Television Variety Shows, Films, Ballet, Music Videos and Commercials.

This is a free event.

Free validated parking will be provided for the 5-story Public/Park Parking Structure on El Tovar Pl.

Funding provided by the California Arts Council, The National Endowment for the Arts, the AIDS Healthcare Foundation and the City of West Hollywood. 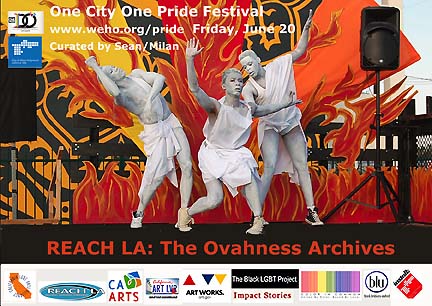 An interactive tour of the “Ovahness Archives” will take guests on a behind-the-scenes virtual tour of the House/ Ballroom scene. Presented by: The California LGBT Arts Alliance, Reach LA and the City of West Hollywood One City One Pride Festival.Sponsored by: The Black LGBT Project, Color in Common, Impact Stories, Black Lesbians United and Install WeHo.

The Last Bastion: A Conversation on Feminist and Queer Museum Politics 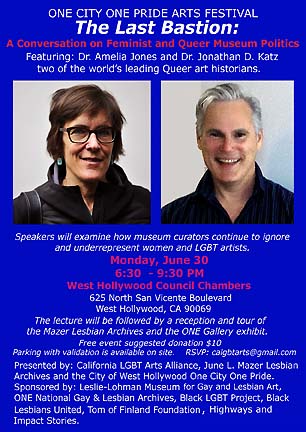 Speakers will examine how museum curators continue to ignore and under-represent women and LGBT artists. The lecture will be followed by a reception and tour of June L. Mazer Lesbian Archives and the ONE Gallery exhibit “The Classical Nude and the Making of Queer History” presented by the Leslie-Lohman Museum for Gay and Lesbian Art.

Your donations help pay for web hosting, our monthly newsletter, monthly arts calendar and the artists that we present.